Vertical Force (バーティカルフォース lit. Bātikaru Fōsu) is a vertical-scrolling shooter developed and published by Hudson Soft, released for the Virtual Boy in 1995. Although not directly part of the Star Soldier series, it is commonly associated with it for its similar gameplay mechanics. In the game, the player controls the starship "Ragnarok" in order to destroy the Mittgard federation from conquering the planet Odin.

Vertical Force was known in development stages as Shoot'Em Up!.[1] It is one of the only third-party Virtual Boy games released, as well as the only other Hudson-produced title for the system, alongside Panic Bomber. It would receive mixed reviews, with most of the complaints being against the Virtual Boy hardware as opposed to the game itself.

Humankind has prospered beyond the wildest imagination of the earliest space explorers. Waves of human colonists have advanced to thousands of planets all over the universe. Each colony built is provided with a caretaker computer and equipped with Android Industrial (AI) Drones to control the planet and mine resources. The materials collected are sent back to Earth.

Now, something has gone terribly wrong and the caretaker computer of Odin (planet #0326) has spontaneously reprogrammed itself. Instead of serving humans and sending minerals to Earth, it seems its new mission is to slaughter humans and make minerals off Earth.

The corrupted caretaker, calling itself Mittgard, has declared war on all humanity. His mechanical army of AI Drones is headed toward Earth, and he has equipped them with a ray that will render the strategic computers and weapons of the United Earth Army inoperative. As a result, wherever the army has tried to intercept the AI Drones they have suffered total defeat.

As luck would have it, a xeno-archaeology team working on Ragnarok (planet #1562) has just made a most fortuitous find. Among the ruins of an alien civilization, a battle machine has been unearthed. Because of its alien design and construction, this battle machine is not affected by the Mittgard rays. The most fortunate stroke is that it is equipped with a device that allows it to reprogram some AI Drones and use them against Mittgard's forces.

After taking possession of the Ragnarok battle machine, the United Earth Army has called on its number one flying ace, YOU, to rid the universe of the menace posed by Mittgard.

Vertical Force is a vertically scrolling shoot 'em up, though it uses a horizontally-oriented playfield. The action takes place in two parallel planes at different heights, with the player's ship being able to quickly alternate between them.

Players control the Ragnarok ship, which can be equipped with three different weapons which can be powered up by picking the same weapon icon multiple times. The ship can also acquire three different types of AI Drones, robotic options which act as support for the ship, attacking enemies on their own accord. These drones can be stocked and detonated to hit all enemies on screen. 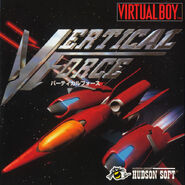 Japanese cover
Add a photo to this gallery

Retrieved from "https://star-soldier.fandom.com/wiki/Vertical_Force?oldid=2254"
Community content is available under CC-BY-SA unless otherwise noted.