Super Star Soldier (スーパースターソルジャー Sūpā Sutā Sorujā) is a scrolling shooter video game developed by Kaneko and originally published by Hudson Soft in 1990 for the Japanese PC Engine and in 1991 for the North American TurboGrafx-16. It is the sequel to Star Soldier, and part of the Star Soldier series by Hudson Soft. According to the company, many people believed Super Star Soldier's graphics were the best of any HuCard game. Although the game was popular in Japan, it received less attention from the rest of the world.

The Mobile version of Super Star Soldier was released on September 3, 2007 in Japan. Konami published it for the Virtual Console on Nintendo's Wii system in North America on November 27, 2006, in Japan on December 2, 2006,and in Europe on December 8, 2006. The game has also been released on the Japanese PlayStation Store on August 19, 2009 and on the North American PlayStation Store on June 3, 2011. It was also released on the Windows Store December 20, 2013 and on Wii U Virtual Console on February 26, 2014, the first being released in Japan only while the Wii U Virtual Console version was released on April 6, 2017 in the United States. The game was also included in the list of games available for the PC Engine CoreGrafx Mini in March 19, 2020 and is available in all the regions.

In the beginning of this new era of time and space, the small fighter aircraft, Caesar, was just beginning its fight against the evil Brains in an attempt to restore peace to the world. The mission was a success, and peace was restored. Now, four years later, the evil Brains are planning their next attack. Lead by their evil leader, Mother Brain, the peaceful existence of the world is once again in jeopardy.

However, do not despair all hope is not lost! In anticipation of the Brains's expected counterattack, an improved version of the original Caesar was designed and built and now sits quietly, ready for battle. It is you, Starbuck, that must pilot this new fighting aircraft Neo Caesar into combat! Go now! Hurry to your ship, you are the world's only hope of peace!

Super Star Soldier introduces most systems which would become staple in the series, bringing back the classic gameplay from the original Star Soldier as well as some of the new systems introduced in Blazing Lazers. The player's ship can be upgraded to fire in five directions, with a variety of special weapons including flamethrowers, electricity, spread guns and heat-seeking missiles. These can be equipped and upgraded by picking up their correspondent icons dropped from enemies. 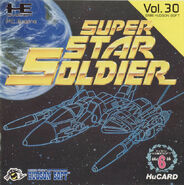 Magazine ad
Add a photo to this gallery
Retrieved from "https://star-soldier.fandom.com/wiki/Super_Star_Soldier?oldid=2301"
Community content is available under CC-BY-SA unless otherwise noted.