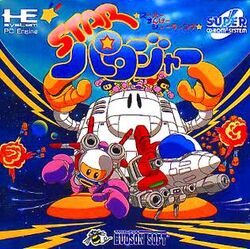 Star Parodier (スターパロジャー lit. Sutā Parojā) is a vertical-scrolling shooter developed by Kaneko and published by Hudson, released on April 24, 1992 for the PC-Engine Super CD2. It is a parody-based spin-off of the Soldier series in the vein of Konami's Parodius games, and is the second spin-off title in the series after Hector '87.

Use this box to create a new article. Feel free to check Special:Wantedpages to view a list of pages that need creation.

Want your community included? See how!

Community content is available under CC-BY-SA unless otherwise noted.
Advertisement