Soldier Blade (ソルジャーブレイド) is a scrolling shooter video game developed and published by Hudson Soft in 1992 for the TurboGrafx-16 system. It is the fourth entry in the Star Soldier series and the last one for TurboGrafx-16. The player pilots the Soldier Blade fighter against the Zeograd Army, aliens bent on conquering Earth. The game features 7 operations (stages) as well as 2-minute and 5-minute challenge modes.

It was re-released for the Nintendo Wii's Virtual Console in January 2007, on the PlayStation Network in February 2010, on the Wii U Virtual Console, and on the iPhone. It was also included in the list of games available for the PC Engine CoreGrafx Mini in March 19, 2020, available for all the regions.

The 21st century. Scientific progress has resulted in a highly advanced civilization. Unfortunately the Earth's natural resources have been depleted as a consequence. The search for resources turns to outer space. The Starlight Plan A fleet of six squadrons with 5000 members will embark on a reconnaissance mission to search for resources vital to Earth's existence. Due to the development of the "Bias Drive" (mankind's first warp drive system), this fleet is able to explore deeper into space than has ever been done before.

Just four months into the mission, however, all contact is suddenly lost. A desperate search by the Earth's government is unable to uncover the cause of the fleet's disappearance. Three years later... Suddenly, the Fleet returns, but they have been consumed by alien life forms! Now they call themselves the Zeograd Army, and they have come to attack the Earth! The Earth's army is unprepared for this sudden invasion by aliens.

But, there is one scientist who has foreseen this apocalyptic event, and who has been preparing for it ever since contact was lost with the reconnaissance fleet. His name: John Howard. His invention: Soldier Blade, a heavy fighter craft equipped with a miniature Bias Drive, designed especially for alien attack. However, his work is rejected by the Association of Scientists, and he is expelled from the organization. Now he is working with the military-run SIA team. The Special Interception Air Force. Sounds nice, but look a little closer. Each team member is a maverick; a dropout from society.

Soldier Blade plays similarly to many Hudson Soft vertical scrolling shooters: players control the ship through seven stages, each one having a mid and end-level boss, and collect power-ups as they progress. Like Super Star Soldier and Blazing Lazers, the ship can take multiple enemy hits depending on how many power-ups the player has collected. The ship is initially vulnerable to one hit, but after collecting three power-ups, the ship can take three hits, each hit degrading the ship's weapon power by one level. The ship has three weapons to choose from as well as a single option, a robot that provides additional firepower.

Every time the player picks up a weapon, the previous weapon is stocked as a special weapon. The special weapon attack is different depending on the weapon. The red weapon special makes the ship's robot temporarily invulnerable, the green weapon special sends out a homing energy blast, and the blue weapon special unleashes an enormous laser beam. Collecting a weapon pick-up of the same color once the weapon in-use is fully upgraded results in a large explosion that clears the screen of smaller enemies and attacks.

Players obtain extra lives by amassing points. Once the player loses all their lives the game is over. An option to start the stage in the beginning is available. Soldier Blade also has a score attack mode where players can select a two- to five-minute-long game based entirely on earning a high score. 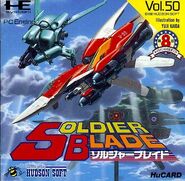 JP cover
Add a photo to this gallery

Retrieved from "https://star-soldier.fandom.com/wiki/Soldier_Blade?oldid=2163"
Community content is available under CC-BY-SA unless otherwise noted.