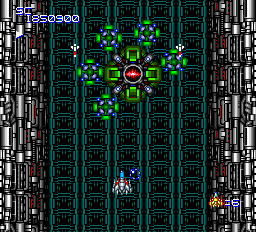 Kanransha is the sixth boss in the video game Super Star Soldier.

Kanransha appears as a large green drone surrounded by smaller drones. It will move around while the drones rotate around it, shooting homing missiles then shooting a spread of small ripples.

It appears in the Stage 6 and the Stage 8's Boss Rush.

Kanransha appears as a Chibi enemy in Stage 6.

Retrieved from "https://star-soldier.fandom.com/wiki/Kanransha?oldid=1415"
Community content is available under CC-BY-SA unless otherwise noted.