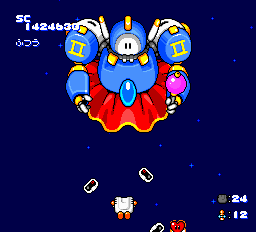 Jumbo Machinder MK II Hanako appears as a comical version of the original Jumbo Machinder from Super Star Soldier. It has a very similar pattern, shooting homing missiles and beam from its hands before they're launched it the player.

If the player waits for a while after both of the boss arms are destroyed, it will drop a "BONUS STAGE" sign which the player can pick up, warping the player to a bonus stage once the boss is destroyed.

Retrieved from "https://star-soldier.fandom.com/wiki/Jumbo_Machinder_MK_II_Hanako?oldid=1963"
Community content is available under CC-BY-SA unless otherwise noted.