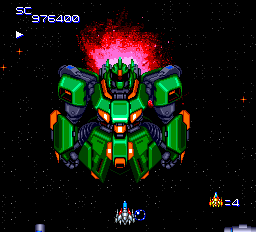 Jumbo Machinder is the fourth boss in the video game Super Star Soldier.

Jumbo Machinder appears as a giant green mech, being fought in the Stage 4 and the Stage 8 as part of the Boss Rush. It moves left and right by going forward and returning, then stops to shoot a series of fast homing missiles which can't be destroyed. It will also detach its fists, which will shoot a spread of rings then launch at the player and return. Both the fists and the boss head must be destroyed before it becomes vulnerable.

Jumbo Machinder appears as a Chibi enemy in Stage 6.

Retrieved from "https://star-soldier.fandom.com/wiki/Jumbo_Machinder?oldid=2124"
Community content is available under CC-BY-SA unless otherwise noted.