Duoss Core Ver. 3.3c is the final boss from Soldier Blade and the first boss from Star Soldier: Vanishing Earth.

During the first phase of the fight Duoss Core will keep a defensive stance, blocking the player's attacks with his shield and occasionally opening up to fire from his huge cannon. Once it takes enough damage the shield and gun will get destroyed, so he will go all out shooting bullets all over the screen, as well as homing missiles, all while moving after the player's ship.

Duoss Core Ver. 3.3c attacks by shooting bullets while moving left and right, shooting lasers from its gun and dropping a series of missiles which create explosions. Once its core is exposed it will shoot bullet spreads while moving until it is defeated. It uses a different pattern in the Caravan Mode, attacking by sending in lots of small enemies at the player. 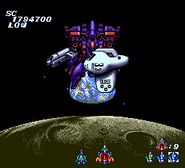 Star Soldier: Vanishing Earth
Add a photo to this gallery
Retrieved from "https://star-soldier.fandom.com/wiki/Duoss_Core_Ver._3.3c?oldid=2017"
Community content is available under CC-BY-SA unless otherwise noted.