Caesar is the player spaceship from the video game Star Soldier.

The Caesar is a ship belonging to the Galactic Fleet which protects Earth. Said to be their fastest ship, the Caesar is equipped with a rapid firing gun which can be upgraded to fire in multiple directions, for a maximum of five directions at a time. It can also be equipped with a rotating shield which protects it from damage. All of these weapons would be carried into later revisions of the ship.

In the PS2/PSP remake, the Caesar also comes equipped with a short range energy burst which causes massive damage to enemies. It is the most balanced among the three selectable ships, with average power, speed and spread capabilities.

Appearances in other media Edit 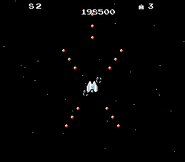 Super Bomberman R
Add a photo to this gallery
Retrieved from "https://star-soldier.fandom.com/wiki/Caesar?oldid=2223"
Community content is available under CC-BY-SA unless otherwise noted.