Blazing Lazers, also known as Gunhed (ガンヘッド) in Japan, is a shoot 'em up game released in 1989 by Hudson Soft for the TurboGrafx-16. This game was developed by Compile, which is only credited in the game's ending as a "cooperator". It is a spin-off of the Star Soldier series.

The game was also included in the list of games available for the PC Engine CoreGrafx Mini in March 19, 2020 available in all regions.

Seated at the helm of 80 tons of awesome firepower - a Gunhed Star Fighter - you've just run into the ruthless Dark Squadron. Dangerously close to the Earth, they threaten to destroy the world with eight Super Weapons. Only you and your star fighter's blazing lazers and bombs stand between them and certain destruction.

Blazing Lazers is a vertically scrolling shoot 'em up. Players control the Gunhed, which can switch between four different weapons by picking the appropriate icons dropped by specific enemies, as well as four different support weapons, one of which changes the properties of the main weapon. All weapons can be upgraded by picking the same icon as the currently equipped weapon, as well as blank icons. In addition to those, the ship can also use a screen-clearing smart bomb which comes in limited quantities. 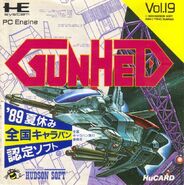 JP cover
Add a photo to this gallery

Retrieved from "https://star-soldier.fandom.com/wiki/Blazing_Lazers?oldid=2247"
Community content is available under CC-BY-SA unless otherwise noted.