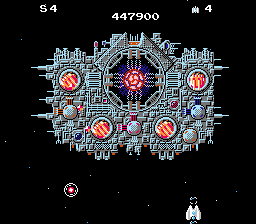 Big Star Brains it is the vastly improved model to the normal Star Brain and the primary antagonist of the original Star Soldier.

It is faced at the end of stages 4, 8, 12 and 16, and also runs on a time limit after which it will escape and send the player back to replay the stage.

Retrieved from "https://star-soldier.fandom.com/wiki/Big_Star_Brain?oldid=2190"
Community content is available under CC-BY-SA unless otherwise noted.